Week 50! Who would have thought that I would reach this number of Alternative Notices! How have you been this week? We are now into March which came in like a lamb on Monday. There were some beautiful days at the beginning of the week and I was able to hang the washing outside for the first time this year. Although the weather wasn’t very warm, the power of the sun’s rays helped the clothes to dry and the blue skies were a joy to behold. The birds are getting busy, although I have yet to see signs of nest building, but no doubt the blackbirds are on the job somewhere. Camellias, early variety tulips and other spring flowers are appearing rapidly as the natural world moves through its routine once again. As Christina Rossetti said “There is no time like Spring, when life’s alive in everything.”

Crocus in Sparrow Park in Lytham and tulips in a local garden.

A family once took their young children on an outing which included a journey on an old steam train. The train went into a tunnel halfway along the line and as someone forgot to switch on the lights, the carriage was plunged into total darkness. The youngest child began to cry but his mother reassured him saying “Don’t be frightened. It’s just a tunnel and will only be dark for a little bit. Let’s look out for the light at the other end of the tunnel as it can’t be far away.”  We are hoping that the light at the end of the coronavirus tunnel is becoming clearer and getting nearer every day. We just need to be patient for a while longer and keep encouraging one another and putting our faith in the Lord. We will get there together.

This year’s ‘Unconditional Appeal’ is in support of work with Leprosy sufferers in Mozambique.
TLM have circulated the following article specially for inclusion in church magazines and newsletters:

Here is an unconditional love that keeps on giving

Leprosy is a disease often considered confined to Biblical times. But did you know there are almost a quarter of a million new leprosy cases diagnosed each year? Even though there is a cure for leprosy, for every person treated there are a hidden 20 needing the cure. Leprosy hides in remote villages like Namatua, where Zaina lives in Cabo Delgado, Mozambique’s most northern province. There are no doctors in Namatua, and medical care is scarce. Leprosy is shrouded by fear and misunderstanding, which means people with the disease face extreme discrimination.

For too long, leprosy has disrupted and disabled lives. It has separated loved ones and torn families apart. But through the power of unconditional love, life in Mozambique, is changing.

The Leprosy Mission is raising up people like Zaina to become Leprosy Changemakers, to lead the fight against leprosy. They are part of a sea change, paving the way for a Mozambique free of leprosy and discrimination.

Zaina was shown God’s unconditional love through the kindness of a stranger. Forever grateful, Zaina’s love for others walking the same path as her knows no bounds. She goes the extra mile to find those who are hidden away and fearful so that they too have the freedom of a new life.

Zaina was a young mum when she first noticed discoloured patches on her skin. She didn’t know what they were, but when they became visible to other people in her home village of Namatua, they recognised the signs of leprosy. Because of age-old myths surrounding disease, some of the villagers banished her to the forest, chanting “go to the bush” over and over. Together with her young son, Zaina was forced to live in the forest. If that wasn’t hard enough, a group of villagers came to take her little boy away. Zaina was heartbroken. Hungry and without medicine, her body became increasingly weak.

By the grace of God, a stranger found Zaina in the forest. He built her a hut to shelter from the rain and took her to a health post where her leprosy was cured. Leprosy Changemakers, trained by The Leprosy Mission, were able to go to Namatua and teach the villagers about leprosy and how it is easily cured.

Zaina was able to take back her future into her own hands and is now a thriving member of her community. Determined others shouldn’t have to suffer a similar fate, Zaina has trained as a Leprosy Changemaker. She is able to recognise the early signs of leprosy and has made it her mission to encourage others affected by the disease.

“I say to someone with leprosy that they should take care of themselves,” she said.

“They should take the medication because this disease has a cure. They should bathe, wash their clothes, brush their teeth, and carry on living. They must realise they will get better.”

The Unconditional Appeal sees churches in the UK partner with communities in Mozambique to build community hubs.

A community hub, or a Hub of Hope, gives a beating heart to a village like Namatua, a place from which to lead the fight against leprosy. A place where Leprosy Changemakers, like Zaina, can learn to recognise early symptoms of the disease. Crucially, a Hub of Hope is a place where people affected by leprosy are welcomed unconditionally.

Will you become a Leprosy Changemaker today by sharing Jesus’s unconditional love for people with leprosy?

There is a wonderful opportunity, thanks to UK Aid Match, for your unconditional love to go twice as far. Gifts to The Unconditional Appeal made from 24 January to 24 April 2021 will be DOUBLED by the UK government.

Your gift of £24 will bring the cure to someone with leprosy. So, by giving £24 your gift will be doubled to £48 so two people can be found, diagnosed, and cured.

It costs £70 to train a Leprosy Changemaker to recognise the early signs of the disease. They will act as a supportive friend to travel with to a health post or make contact with a Community Health Worker who can give the cure. So, by giving £35 today, your donation becomes £70, training a Leprosy Changemaker whose love goes on to transform the lives of others.

This is an unconditional love that keeps giving.

If you would like to support this appeal, please let Linda have your donation by cheque made payable to TLM. She will collate the cheques, so that she can report back to you how much the White Church has raised. She will be sending all the cheques to TLM before Easter. If you need to know how to get your donation to her, just give her a call on 640359.  Linda Lunn, TLM Church Representative

It’s good to be back after a couple of weeks holidays in the Caribbean (I wish).
We’ve not had an overwhelming response to the Sunday evening services so we’ve decided to finish them for now.
Remember, you are all invited to call at any time to share prayers over the phone – you don’t need to book and it will never be an imposition. Same goes with visits to loved ones and fellow congregants in Blackpool Victoria & Clifton hospitals – just pass on their name and they will be visited and offered prayers.

The Zoom service next Sunday  7th March will be a communion service led by Janet; please have your bread and wine/cordial ready.

A reminder of the Zoom links for the various gatherings:

Val M would like to thank the people of the White Church for all their phone calls, flowers and cards that cheered her up so much over the past few months.

We pray for young people as they return to school and college on Monday. Be with them as they re-adjust to the change of routine and encourage them to achieve all that is possible. We pray for those in our congregation who are struggling and ask for Your blessing on them. Be with them in their time of need and grant them strength and Your love and the peace which passes all understanding.  We ask these prayers in Your name. Amen

Please join me in saying the Grace together.

May the Grace of the Lord Jesus Christ, and the Love of God and the Fellowship of the Holy       Spirit be with us all, now and evermore. Amen

God Bless you all 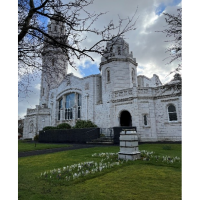 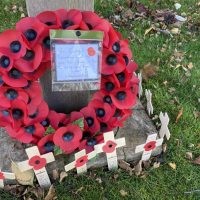