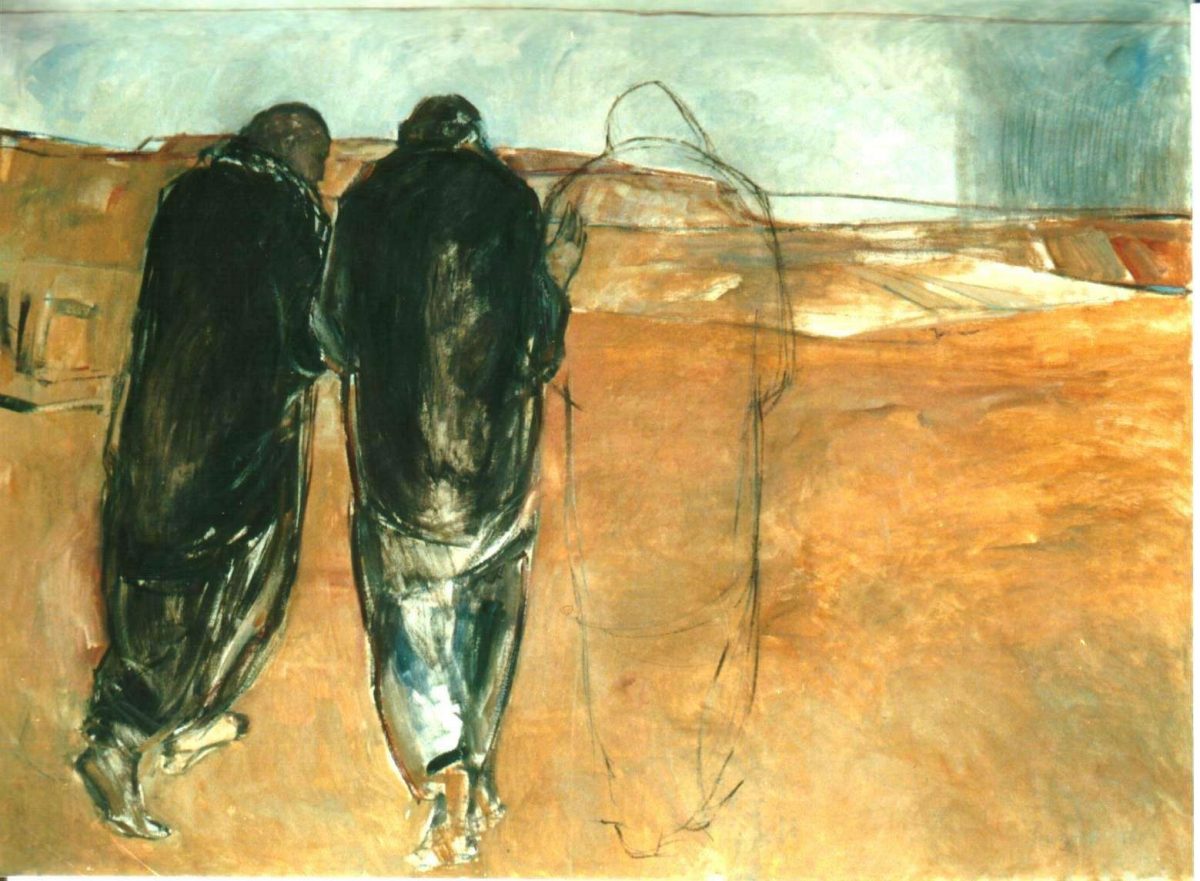 The hospital seems a little less busy, but I’ve heard that the foodbank (especially the one at Kirkham) was really, really busy.

I’ve been able to spend a little more time on the phone this week; thanks to all of you who’ve given me a warm welcome.

I’ve had to shave off my beard because the surgical masks are not airtight if you have stubble on your chin!

They all agreed that being beardless wasn’t my best look!

Now, on my travels this week I’ve met a number of you purely by chance as I’ve been   walking around town or chilling in church gardens. Some of you haven’t instantly recognised me without my beard. One of you (who shall remain nameless) only asked me who I was when we were finishing our conversation: some 20 minutes!

‘While they were talking and discussing, Jesus himself came near and went with them,

but their eyes were kept from recognising him.’ Lord, open our eyes, and travel with us,

for you are risen indeed, hallelujah!

13 Now that same day two of them were going to a village called Emmaus, about seven   miles from Jerusalem. 14 They were talking with each other about everything that had happened. 15 As they talked and discussed these things with each other, Jesus himself came up and walked along with them; 16 but they were kept from recognizing him.

17 He asked them, “What are you discussing together as you walk along?”

They stood still, their faces downcast. 18 One of them, named Cleopas, asked him, “Are you the only one visiting Jerusalem who does not know the things that have happened there in these days?”

“About Jesus of Nazareth,” they replied. “He was a prophet, powerful in word and deed before God and all the people. 20 The chief priests and our rulers handed him over to be sentenced to death, and they crucified him; 21 but we had hoped that he was the one who was going to redeem Israel. And what is more, it is the third day since all this took place. 22 In addition, some of our women amazed us. They went to the tomb early this morning 23 but didn’t find his body. They came and told us that they had seen a vision of angels, who said he was alive. 24 Then some of our companions went to the tomb and found it just as the women had said, but they did not see Jesus.”

25 He said to them, “How foolish you are, and how slow to believe all that the prophets have spoken! 26 Did not the Messiah have to suffer these things and then enter his glory?” 27 And beginning with Moses and all the Prophets, he explained to them what was said in all the Scriptures concerning himself.

28 As they approached the village to which they were going, Jesus continued on as if he were going farther. 29 But they urged him strongly, “Stay with us, for it is nearly evening; the day is almost over.” So he went in to stay with them.

30 When he was at the table with them, he took bread, gave thanks, broke it and began to give it to them. 31 Then their eyes were opened and they recognized him, and he disappeared from their sight. 32 They asked each other, “Were not our hearts burning within us while he talked with us on the road and opened the Scriptures to us?”

33 They got up and returned at once to Jerusalem. There they found the Eleven and those with them, assembled together 34 and saying, “It is true! The Lord has risen and has appeared to Simon.” 35 Then the two told what had happened on the way, and how Jesus was recognized by them when he broke the bread.

Isn’t it surprising that the smallest of changes to our appearance or circumstance can bring instant anonymity!

In this passage, Luke doesn’t tell us why the two disciples don’t recognise Jesus – he just tells us they don’t.

The story of the road to Emmaus is a two-part narrative: the worried conversation on the road, and the moment of recognition in the breaking of the bread.

Maybe uncharacteristically, Jesus doesn’t let on who he is: he could have addressed them by name or revealed the wounds on his hands. In fact, he reprimands them: ‘How foolish you are, and how slow to believe all that the prophets have spoken!’.

He then reorders their perception of the crucifixion: they have seen it as a disaster; he reframes it as a necessity ‘Did not the Messiah have to suffer these things and then enter his glory?’ and then launches into a bible study, looking at old, familiar texts in a new light.

Then Jesus breaks the bread – and the penny drops!

And ever since then Christians have sought meaning in scripture and broken bread – it’s what we do! This passage assures us that through these acts we are going to meet the risen Christ.

Don’t let the current situation cloud your vision. In all of this change that’s happening around us we could so easily loose sight of Jesus. Do what you do best: read your bible and remember Jesus whenever you break bread.

Jesus will lead us through the change and chaos. He will walk with us as we journey on into the future together.

Forgiving Lord; We lay our busy lives before you.

Sometimes, like those on the road, we do not recognise you. Forgive us, Lord.

At other times we only realise much later on that we were in the presence of Jesus. Forgive us, Lord.

For the times we never noticed you at all, forgive us, Lord.

For the opportunities that we might have missed to speak a word of healing or encouragement to someone in need, forgive us, Lord.

For the times we have just wanted to go our own way, even when we know it’s not your way, forgive us, Lord.

Lord, I don’t want to be jealous of my faith, hugging it closely to myself.

I want to get out on the road of life and share it with all who cross my path. Help me, Lord.

Sing or hum this to yourself (raise the roof)!

Round the corners of the world I turn, More and more about the world I learn; All the new things that I see

You’ll be looking at along with me.

As I travel through the bad and good, Keep me travelling the way I should. Where I see no way to go,

You’ll be telling me the way, I know. And it’s from the old I travel to the new; Keep me travelling along with you.

Give me courage when the world is rough, Keep me loving though the world is tough; Leap and sing in all I do,

Keep me travelling along with you:

You are older than the world can be, You are younger than the life in me; Ever old and ever new,

Keep me travelling along with you:

Even though you may be confined to home, walk with Christ this week

Pick up the phone, share your understanding of His gospel message with somebody you love.

May our risen Lord bless you in all you do and all you go through. Amen.