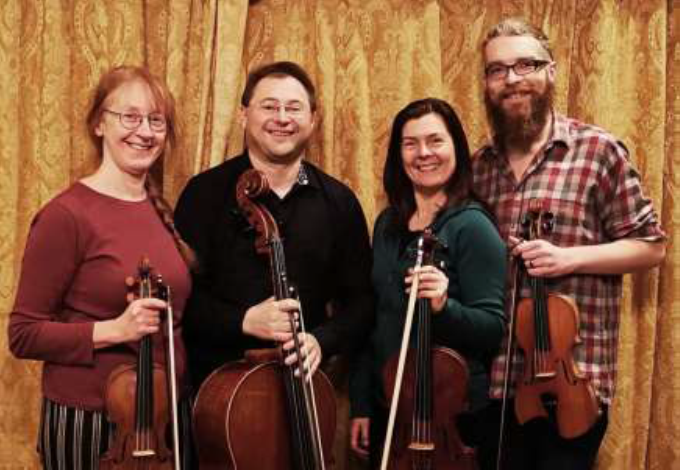 PAMELA REDMAN (violin) has many years’ experience of playing and performing as a
chamber and orchestral musician. Having suffered the frustrations of being an amateur
player she decided to give up her job as a GP and focus on studying the violin. She
attended the RNCM as a mature student over a 2 year period and has also studied since
with Gina McCormack and Paul Barritt. Previous teachers include Howard Davis, Igor
Petrushevsky and Catherine Yates.
Pamela currently leads the Westmorland Orchestra as well as various ensembles for
Choral Society concerts in Cumbria. She also plays as a soloist and in various chamber
ensembles. She is in demand as a local freelance violinist and also enjoys a little private
violin teaching. She was recently appointed Upper Strings Tutor for the Westmorland
Youth Orchestra.
ALEX PHILLIPS-YATES (violin) is a freelance musician based in Lancaster, and enjoys
the variety that being a multi-instrumentalist brings. As a string player, his work
includes orchestral playing and chamber music, including with his own wedding quartet
“What The Pluck”, which specialises in pop and rock music. He is also a pianist, and
performs 20-30 times a year as the Repetiteur for Encore Opera. He also does recitals
both as a soloist and as an accompanist. Aside from being an instrumentalist, Alex works
as an MD in Musical Theatre, regularly working with students at Edge Hill University
and Kendal College. He was also recently appointed Musical Director of the Lancaster &
District Male Voice Choir.
ALLISON CALDERBANK (viola), is an experienced orchestral and chamber player. She
turned professional in 2009 after completing a Post Graduate Diploma at the Royal
Northern College of Music. Since then, she has appeared regularly with the Halle
Orchestra as a freelance player and she played in 2013 at a Promenade concert with
them at the Albert Hall under the baton of Mark Elder. She has also played in several
CD recordings with the Halle. She has also played as lead viola in many of the orchestras
in the North West, including the Haffner Orchestra in Lancaster for four years and
the Liverpool Mozart Orchestra. Allison is also a qualified Chartered Accountant. She
now combines her music and accountancy careers, enjoying both.
ROBERT BULLER (cello) studied cello at the Royal Northern College of Music with Emma
Ferrand prior to becoming a freelance IT consultant. He plays for many local orchestras
and choral societies in Lancashire, North Yorkshire and Greater Manchester as principal
cello for the Promenade Concert Orchestra, Settle Orchestral Society as well as
principal double bass for the Piccadilly Symphony Orchestra. Robert regularly performs
as a soloist and chamber musician with various ensembles, including the Pennine Piano
Trio, the Cezanne Ensemble (string quartet/trio) and the Eberle String Trio.